My year of running fearlessly: 2016

I say ‘My year of running fearlessly’ due to the fact this was the year I really discovered the world of running, outside of running in my neighborhood casually. I got to run my first half marathon, run in different states, different terrain, and meet some new people. Most of all my running helped me deal with my stress and anxiety over the year in a constructive way. Running has given me such much over the past year, but most of all it has made me happy. I will keep running as long as my body will allow.

In this post, as it is New Year’s Eve, I wanted to go through 2016, by each month and recap what I’ve done, running wise this year. They will be small sentences to share what I did that month, but nothing in elaborate detail. Share what you’ve accomplished in 2016 as well. I’d love to read it!

January:
I ran my first ever half marathon at Walt Disney World in Orlando, Florida. I was scared to say the least because my training fell a bit short. I went to London for 10 days right before the race, and I did not run at all. Big mistake. But it was my first half marathon; I dressed up loosely as Elsa from Frozen, and had a lot of fun. There is nothing like entering the Magic Kingdom on Main Street during a race. I had so much fun at my first half marathon, that afternoon I registered for the Gasparilla Ultra Lime Challenge: 15K and 8K. I also went to Naples, Florida and ran to the beach which was only about 1.5 miles.

February:
I walked the Krispy Kreme challenge (5 miles) at the beginning of the month with my sister in Raleigh, North Carolina. It was about 22 degrees outside and I was frozen! It was great seeing all the NCState students participating in the race though. Later on in the month, I ran the Gasparilla Distance Classic 15K and 8K in Tampa, Florida. The expo was amazing; honestly just as good as RunDisney. My favorite race was the 15K. I dressed up as a pirate, and had the chance to meet Meb, the Olympian at the finish line. Also, my fiancé surprised me, and came out to support me at the race. The 8K was definitely my defeat. I had chaffing from the race before, my legs were tired, and it was very hot outside. At the finish line, I ended up vomiting and feeling very queasy. On the bright side, I did get my challenger medal!

March:
I started this blog! I ran the Bolt Run 5K with my fiancé. So much fun!  I visited my grandparents in Naples, Florida and got to run on the Vanderbilt beach for a few days. That was quite wonderful, and I had the confidence to run further. 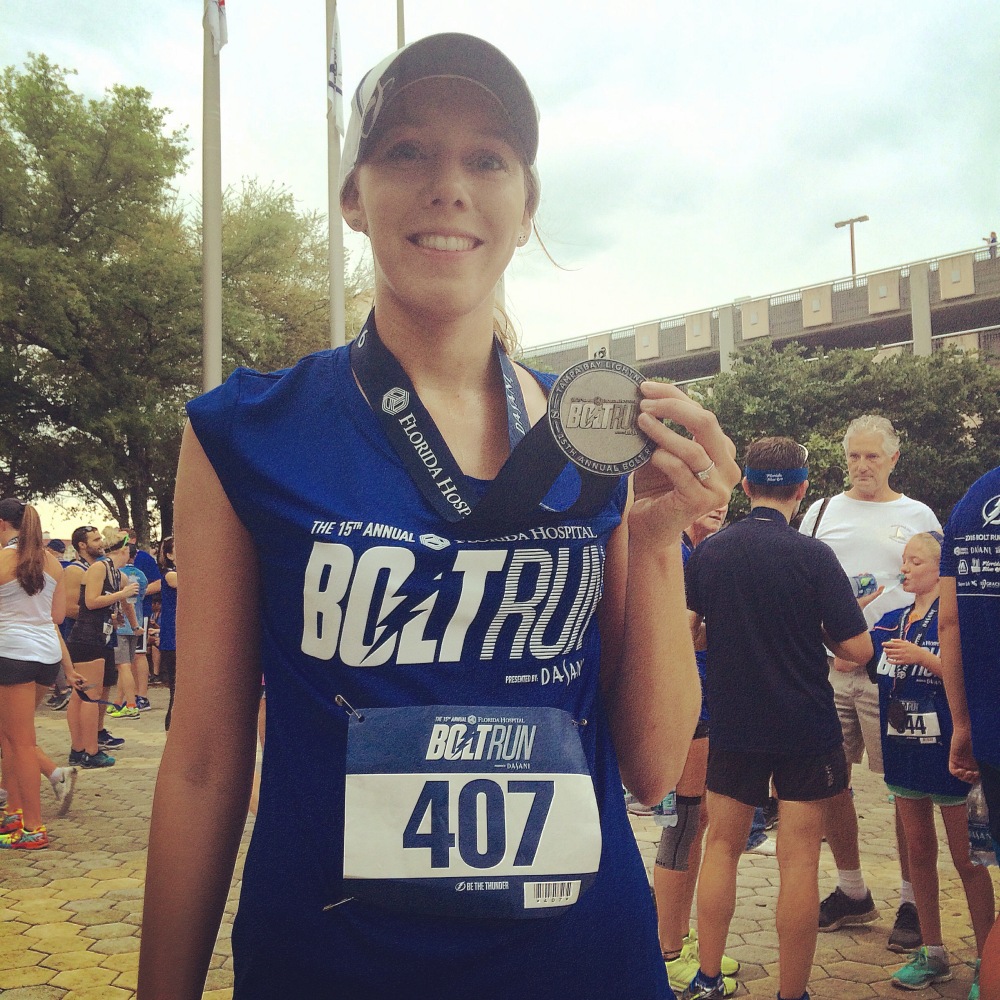 April:
I started training at USF on Saturdays with a new friend for the Star Wars half marathon that month. I had this awesome Star Wars tank and black sparkly cape for the Star Wars half marathon. We had a ton of fun during that race. Also, in the month of April, I went to Raleigh and volunteered to be part of the race crew for the Rock n Roll Marathon. My mom and sister came with me, since I was there in the city to visit them. Man, for April it was freezing! We gave finishers those runner heat blankets because it was so cold. A few week later, I volunteered at the Tampa International Airport 5K where people ran on the runway. I got to pass out the medals!

May:
I volunteered at the Girls on the Run 5K in Tampa, Florida, and ran the race with one of my friends. Also in May, I went to Maine and got the chance to run on the beach in Cape Elizabeth while my dad walked the beach.

June:
Now came the time where I could run more than 4 miles outside in the heat of Florida. There were no races this month, but I got to run on the Indian Rocks Beach a couple of time. Wow, reflecting on this year is really making me this how lucky I am on how many times I got the run on the beach. Mind you, where I lived in Florida, it was an hour away from the beach, so not that close.

July:
Nothing much happened here minus all the chaos from my fiancé and I moving to North Carolina.

August:
I started planning my races for the Fall, and increased mileage. I went to yoga classes with my sister every Sunday at the Raleigh Beer Garden. It was also, the Rio Olympics! The marathons were so much fun to watch. The Run Fast, Eat Slow cookbook came out this month. Try the superhero muffins, people. 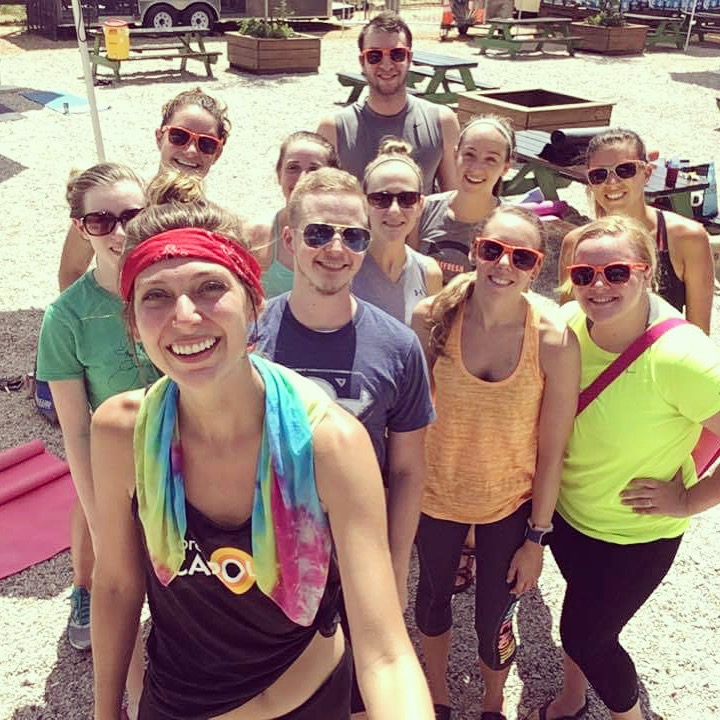 September:
Training; increasing mileage. Ran with a local running group for a morning run. Met some great people to talk to. Wish I went to run with them again, but their group runs are on Tuesday nights and it was always really difficult for me to make it because of late afternoon work meetings. At another running store, I went to a nutrition running class- it was slightly helpful. Lol.

October:
I got to run the Running of the Bulls 5 miler in Durham, North Carolina. The atmosphere was very much like a local races in downtown Durham, but the organization felt like a larger race. I cannot say enough good things about this race. The course itself was challenging and very hilly in a good way. I made a PR. Oh, and got to eat a Lobster Roll after the race. That’s what I call a winner! 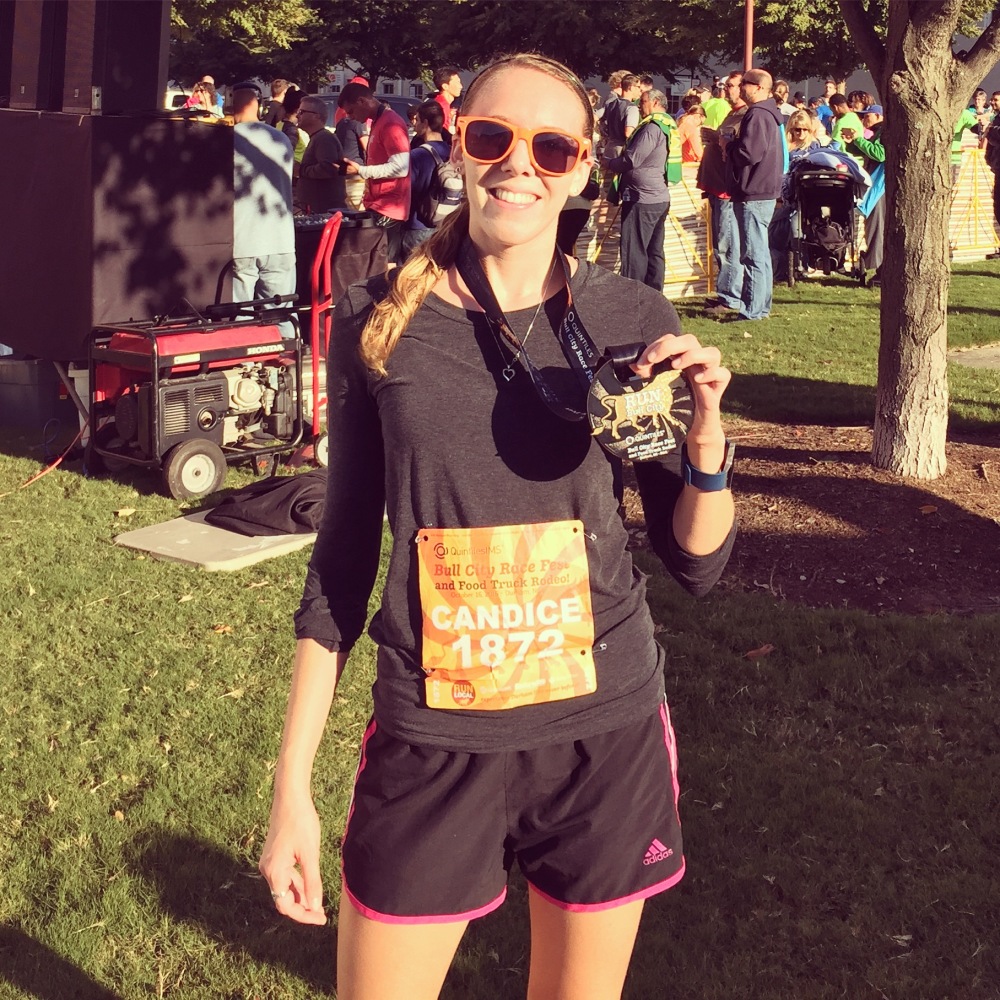 November:
I ran the City of Oaks Half Marathon in Raleigh, North Carolina. It’s one of the biggest races in Raleigh each year. The course was fantastic going through NCState, Cameron Village, and downtown. I felt strong in this race up until mile 11. Then I just wanted the race over. Unfortunately, I vomited at the finish line. After that race, I felt I should focus on training and not run another race until the Walt Disney World half marathon I registered for.

December:
I ran a half marathon in my neighborhood one morning, and felt amazing afterwards. That is huge progress for me! I meet Charlie Engle, the ultramarathoner, at the Quail Ridge Book store. He signed my book, and told me to enter in a marathon!
During Christmas vacation I got to run in Dallas, Texas…well typically Colleyville. I ran in their downtown area and near their city hall. Very cool. I also got the chance to run in Downtown Raleigh, just yesterday to the NCState Bell Tower. In December, I registered for the virtual Hogwarts Running Club 9 3/4 mile race. The medal came in the mail, and I plan on running the miles on Monday so I can ‘earn it’. This will be my first ever virtual race, and I don’t know how I feel about it, but I love Harry Potter. 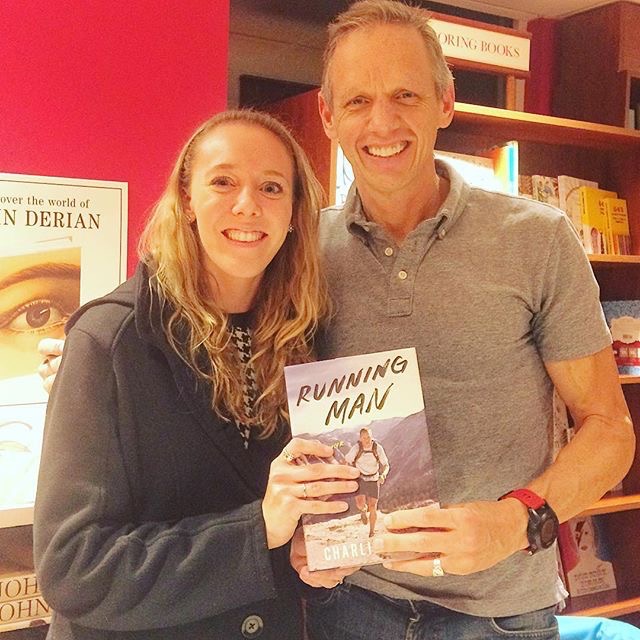